Iron Burning – Upon contact with the air, a shower of tiny iron particles spontaneously catch on fire. 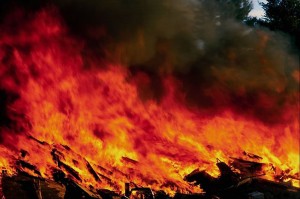 Being prepared is the first step in survival.

Have you ever used a metal grinder or seen one in action on a piece of iron? Notice how thousands of glowing hot sparks fly off the wheel as it removes tiny bits of fresh iron off the chunk of iron being worked on. These tiny bits of iron are actually spontaneously catching on fire as they are exposed to the oxygen in the air.

If you can create a small enough particle of fresh iron, upon contact with oxygen in the air the iron particles increased surface area will oxidize faster than it can dissipate the heat formed during the reaction. The result: the particle of iron spontaneously becomes so hot that it glows as it oxidizes – and can be used to catch tinder on fire.

In a nutshell the process of using a flint and steel to start a fire works like this:

Advantages of Flint and Steel

Flint and steel has been used in starting fires for centuries. In the days before matches were invented, flint and steel offered the ability to start a fire without having to carry a hot coal wherever one traveled, and worrying about losing it or having it go cold.

Starting a fire using flint and steel takes a more expertise and preparation than simply striking a match, however many survival experts feel this disadvantage is overcome by the fact that a wet or damp flint and steel can still be used to start a fire, and that a flint and steel can start many thousands of fires without wearing out; both very important attributes when surviving in the wilderness.

Flint and steel overcomes these problems and provides the survivor with means of starting a fire that is more reliable than matches – if he is skilled enough to use it.

source: How does flint and steel work? More specifically, what causes the sparks when you strike a piece of flint with steel? The answer may surprise you!

8 thoughts on “Know The Secret To Using Flint And Steel To Start A Fire?”