Survival manuals often mention that the livers of polar bears are toxic due to their high concentrations of vitamin A. For this reason, we mention the chance of death after eating this organ. Another toxic meat is the flesh of the hawksbill turtle. You recognize them by their down-turned bill and yellow polka dots on their neck and front flippers. They weigh more than 275 kilograms and are unlikely to be captured. 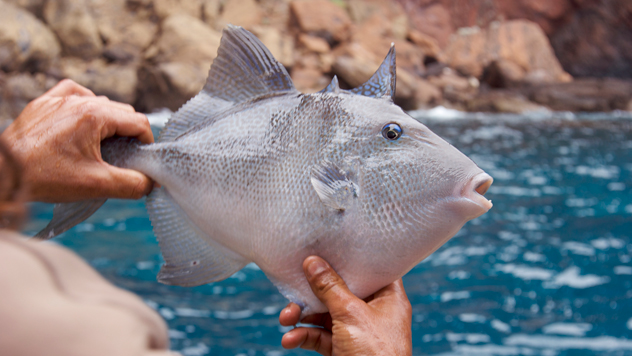 Many fish living in reefs near shore or in lagoons and estuaries are poisonous to eat, though some are only seasonally dangerous. The majority are tropical fish; however, be wary of eating any unidentifiable fish wherever you are. Some predatory fish, such as barracuda and snapper, may become toxic if the fish they feed on in shallow waters are poisonous. The most poisonous types appear to have parrot-like beaks and hard, shell-like skins with spines and often can inflate their bodies like balloons. However, at certain times of the year, indigenous populations consider the puffer a delicacy. BlowfishBlowfish or puffer (Tetraodontidae species) are more tolerant of cold water. You find them along tropical and temperate coasts worldwide, even in some of the rivers of Southeast Asia and Africa. Stout-bodied and round, many of these fish have short spines and can inflate themselves into a ball when alarmed or agitated. Their blood, liver and gonads are so toxic that as little as 28 milligrams (1 ounce) can be fatal. These fish vary in color and size, growing up to 75 centimeters in length. TriggerfishThe triggerfish (Balistidae species) occur in great variety, mostly in tropical seas. They are deep-bodied and compressed, resembling a seagoing pancake up to 60 centimeters in length, with large, sharp dorsal spines. Avoid them all, as many have poisonous flesh. BarracudaAlthough most people avoid them because of their ferocity, they occasionally eat barracuda (Sphyraena barracuda). These predators of mostly tropical seas can reach almost 1.5 meters in length and have attacked humans without provocation. They occasionally carry the poison ciguatera in their flesh, making them deadly if consumed.

Other Dangerous Sea CreaturesThe blue-ringed octopus, jellyfish, and the cone and auger shells are other dangerous sea creatures.Blue-Ringed OctopusMost octopi are excellent when properly prepared. However, the blue-ringed octopus (Hapalochlaena lunulata) can inflict a deadly bite from its parrotlike beak. Fortunately, it is restricted to the Great Barrier Reef of Australia and is very small. It is easily recognized by its grayish white overall color and iridescent blue rings. Authorities warn that all tropical octopus species should be treated with caution, since many have poisonous bites, although the flesh is edible. JellyfishJellyfish-related deaths are rare, but the sting they inflict is extremely painful. The Portuguese man-of-war resembles a large pink or purple balloon floating on the sea. It has poisonous tentacles hanging up to 12 meters below its body. The huge tentacles are actually colonies of stinging cells. Most known deaths from jellyfish are attributed to the man-of-war. Other jellyfish can inflict very painful stings as well. Avoid the long tentacles of any jellyfish, even those washed up on the beach and apparently dead. Cone ShellThe subtropical and tropical cone shells (Conidae species) have a venomous harpoonlike barb. All are cone-shaped and have a fine netlike pattern on the shell. A membrane may possibly obscure this coloration. There are some very poisonous cone shells, even some lethal ones in the Indian and Pacific oceans. Avoid any shell shaped like an ice cream cone. Auger ShellThe auger shell or terebra (Terebridae species) are much longer and thinner than the cone shells but can be nearly as deadly as the cone shells. They are found in temperate and tropical seas. Those in the Indian and Pacific oceans have a more toxic venom in their stinging barb. Do not eat these snails, as their flesh may be poisonous.