There are a bazillion blog posts around about prepping for flu-season, ranging from stocking-up on Elderberry Syrup ( a good idea) to getting (or avoiding) flu shots to getting hand-sanitizer to wearing an NBC HAZMAT suit every time you leave the house. Take ‘em all with your own grains of salt. 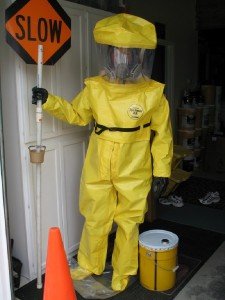 There’s a whole other area of preparations that get somewhat glossed-over. What happens if one of those sneaky li’l viruses actually makes it past all those carefully-crafted barriers, and you actually get sick? It can happen to the best of us.

It’s an unfortunate, but true, Fact of Life that, the older we get, the harder this type of illness hits us. What might have been a 2 day annoyance 20 years ago can KNOCK YOU FLAT ON YOUR BUTT for a couple weeks, now. Not a fun fact, but true. It can be a lot worse if you live alone.

A bit of American History to consider, before thinking “it’s just the flu, no big deal”.

When our European ancestors first came to the New World, our First Nations ancestors all along the woodlands of the East Coast lost about 70-90% of their population within the first 100 years. They weren’t killed off by force of arms, they weren’t killed off by ‘incurable’ things like imported STD’s (despite popular literature) or Bubonic Plague. They weren’t even killed off directly by the imported “colds and flus and sniffles” that they had no immunity against. They died of dehydration. This sounds silly on the surface, but think about it.

If every single individual in the village is too sick (due to lack of immunity) to make the hike to the spring, or the creek, for water, for 5 days, there is a very good chance that no one at all will survive. A little thing like a cup of water a day could have changed our history dramatically.

What does this mean today?

Get an extra case of bottled water, and stick it someplace close to your bed. (You may not want to get up and walk to the kitchen). A case of some electrolyte-replacement drink of your choice is a good idea, too.

Chicken Soup. Yes, “Grandma Penecillin” it does help. Last time I was seriously down with the flu I had a lot in my freezer, downstairs. I didn’t get down there for 6 days. Now, a half-dozen cans of non-condensed chicken noodle soup in the bedroom too (“Progresso” brand, with pop-tops) – you can ‘chug’ them right out of the can.

If you don’t mind your bedroom seeming like your old college dorm room, a small ‘dorm’ fridge and microwave oven right by the bed, in place of the standard “night stand” is not a bad idea. Remember what “Survivorman’ Les Stroud once said, “In a survival situation, 2 of the things you miss most are something hot and something cold”. If you are feeling too sick to get out of bed for a week, and there’s no one around to help you, you ARE in a survival situation, make no mistake about that.

Think you’re getting sick? Get ready, just in case.
Put a couple bags of that soup in your dorm fridge and let them thaw. Make a big pitcher of green tea and fresh ginger root and put that in your fridge too. Better hot, works cold, too. Toss in some bottled water and electrolyte drink, too, you’ll be happy you did.

Plug in your phone next to your bed, and don’t be embarrassed to use it to yell for help if you need it.

Stay well, stay safe, we’re all in this together.

Another Type of Flu-Season Prep to Consider. | The Survival Geezer.