Although nearly 8,000 people are bit by venomous snakes each year, there are usually no more than eight deaths. However, this should not lead backpackers and hikers to believe it isn’t something to worry about. Snakes do not want to waste their poison on humans, but rather rodents and other small animals to feed on. If a bite victim is not treated quickly, the venom can be deathly. Even a bite from a so-called “harmless” snake can cause infection or allergic reaction.

While in the outdoors, do not pester, bother, or provoke snakes or other animals as you are in their territory. Do not play with them or attempt to pick a snake up unless you are a trained professional. If a snake is to bite a human, it is merely defensive in nature and will likely only leave enough venom behind to cause illness.

Rattlesnakes can strike from a distance of half their body length. Let the snake slip away, or walk around it. When scrambling up rocky trails, watch where you put your hands, especially on sunny ledges.

Avoid hiking in areas where snakes are known to be. Stay out of tall grass and on the trail as much as possible. If you must invade snake territory, wear long pants, ankle-high boots, or even snake-proof gaiters. Also, be careful when stepping in areas where snakes could be hiding, such as under rocks or logs. If you are entering an area where you can not see your feet, kick ahead of you to give snakes enough warning and time to slither away. However, always keep your hands and feet out of areas where you are unable to see them. Also, be careful around rocks or while picking up firewood.

Symptoms compiled from the University of Maryland Medical Center. For a more in-depth map of these symptoms, see our Common Snake Bit Symptoms Map. 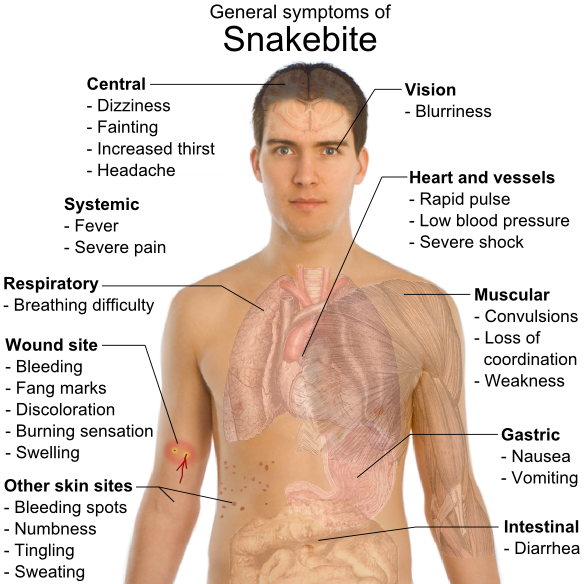 All snakes will attack if they feel threatened or surprised, but only a handful are actually venomous. In any case, treat every bite seriously while you are backpacking or hiking. This list includes the:

Call 911 or your local emergency number immediately if someone has been bitten by a snake. If treated correctly, many bite victims will not have serious injuries. However, medical support needs to know the correct anti-venom to use, as this is the only treatment. Attempt to identify the snake or remember its appearance in order to let the hospital or poison control what type of anti-venom is needed.

You may also call the National Poison Control Center at 1-800-222-1222. The center can be called from anywhere in the United States. This national hotline number will let you talk to experts in any kind of poisoning. You may call them with any questions regarding prevention or treatment. This national number is connected to all the local poison control centers. It does NOT need to be an emergency to call the National Poison Control Center – you may call them for any reason 24 hours a day, 7 days a week.