In order to provide high-quality food for your entire family throughout the year using your garden, you have to plan well. If you grow the majority of your food at your homestead garden, this guide will help you in achieving a successful and plentiful produce. With the correct planning and use of the garden; you may yield a big amount of calories per foot to ensure food sufficiency at your home. 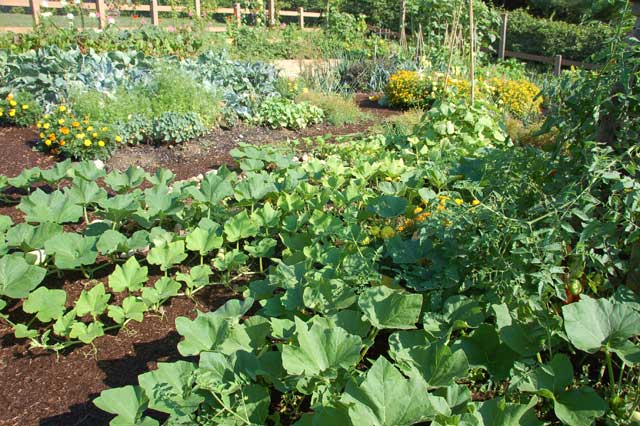 How to Have a Successful Yield

You need to take the following activities into consideration if you want to get enough supply from your garden.

You may start by making a list of the foods which you and your family prefer while also noting the quantities. You may use a chart to make your plan better. It will guide you on how much of each of the food crops you need to grow. This also helps you to organize the garden.

It is advisable to choose an appropriate method for your gardening. The following is a list of gardening methods which will help you in yielding a great amount of calories. You may choose any that suits the nature of your garden.

The following are examples of great food crops that will do well in your homestead garden with brief explanations about their benefits.

Potatoes are a good source of both proteins and carbohydrates. They provide more carbohydrates per square foot than any other common vegetables. Potatoes also yield more protein per square foot than all other vegetables, except for beans. They can be stored for many months without any need for electricity or processing which adds to their benefits.

Legumes such as beans, peas, cow-peas and lentils are nutritious, rich in protein and easy to grow. They can be stored for long periods during winter without need for electricity or processing. Different legume species do well in different conditions. It is recommended to grow many different species for a better calorie per foot yield.

Corn is the most perfect grain for growing and processing on a small scale garden. The harvesting process is easy and they do not require threshing. Fresh corn is rich in vitamins C, B1 and B5. It also contains plenty of dietary fiber, manganese and phosphorous.

Squash are another great source of carbohydrates, vitamins C and A as well as antioxidants (carotenoids). They thrive well in most gardens.

Staple crops are very ideal if you rely on your homestead garden to feed your family. The best staple food crops for ensuring food self-sufficiency are easy to harvest and store. They return great yields and are calorie-dense to offer your entire family the food energy they need each day.

Jack Neely is a fitness expert, survivalist, and world traveler. He’s been in several life or death situations, and he’s making an effort to spread his knowledge around the web to help others survive these situations as well. He’s also on the content team at The Tactical Guru.

Raised beds are the perfect way to start your own garden. Fruits, vegetables, flowers and shrubs can all thrive in the raised bed environment. The popularity of raised beds is on the rise because of their many benefits – reduce soil erosion, the ease of access to control weeds and pick vegetables, creation of a warmer soil temperature in the spring, plus many more.

Follow this guide to learn how to create your own raised bed garden. From the building materials to the vegetables – We dive into everything you will need to create a flourishing raised bed.

Build The Benefits of Raised Beds Infographic by CustomMade

Gardening Top Tip: Tomatoes need calcium to achieve their full flavor potential, and calcium is often greatly lacking in our soils. 95% of a dry eggshell is calcium carbonate.

When planting your tomato plants crush up (to powder) about 4 or 5 egg shells and put them in the bottom of the hole. Then plant your tomato on top. They’ll provide calcium and prevent blossom end rot. 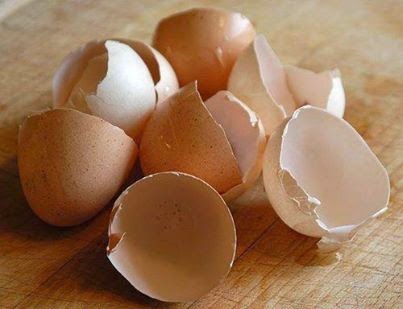 See Which Vegetables to Grow During Summer : Click Here

If you are looking for vegetables to grow during summer, these should be the ones you must consider. Plant Heirloom Seeds : Survival Seeds 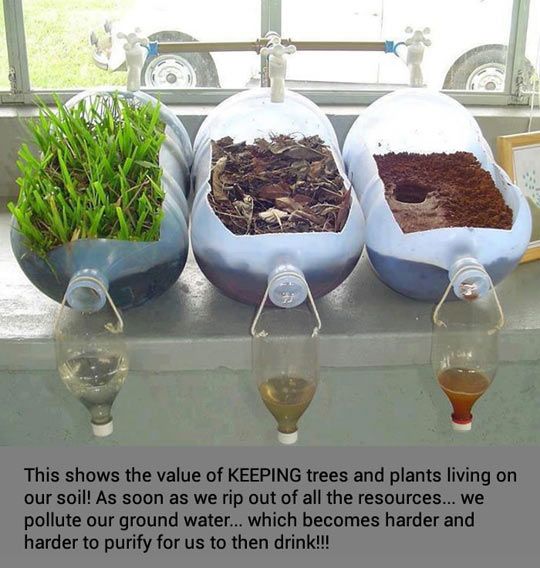 Commonly found in Mexican and Asian dishes, the leafy, bright green leaves of the cilantro plant might not only be tasty, but also help to purify polluted water. Scientist have recently discovered that, in developing countries, cilantro might actually help to absorb some heavy metals found in contaminated ground water.

Students, along with Professor Douglas Schauer of Ivy Tech Community College, were searching for a cheap and accessible way to filter ground water. They dried and crushed numerous wild plants while conducting their research, and found that cilantro was the most effective.

“And then we put that into a solution that has a known amount of lead in it,” Schauer said. “That’s the metal we used as our test metal. Shake it up for a little bit, and then we let the particles settle out, and then we test the water to see how much lead is left behind.”

The researchers found that their cilantro filters were successful in removing many of the pollutants, especially nickel and lead.

Biosorbents are used in environmental cleanups, and help to remove contaminants like lead, arsenic, and other harmful metals. According to the research, the outer wall structure that makes up the cilantro plant is what makes the plant perfect for absorbing the metals.

“The organic toxins we can take care of pretty easily with a number of different methods, but the only way to really get rid of those heavy metals is to treat them with filtering agents like activated charcoal (like what’s found in a Brita filter), but those types of materials are kind of expensive,” said Schauer to CNN. “They are a little expensive for us to use, but they are very expensive to the people living in that region.”

One method of purification using the cilantro filtering method is grinding up cilantro and passing water though it using a tube, which allows clean water to trickle out of the opposite end of the tube, ultimately leaving even cleaner water. Another method involves drying cilantro and putting it in tea bags, which are then placed in a pitcher of water, helping to take out some of the toxic metals. 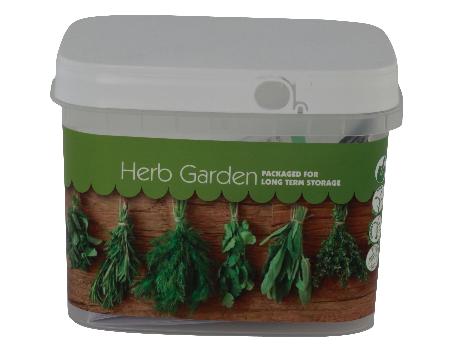 Schauer believes that, since cilantro is a common herb in poor countries, it could substantially and positively affect access to water in many developing nations.

“Our hope is for somebody who lives in that region to simply be able go in their back yard and grab a handful of cilantro, maybe let it dry out for a couple days sitting on a rock in the sun, and then maybe a handful of that would purify a pitcher of water,” he said.

You can turn a small yard, a corner in a community garden or an unused space in your home (or Bunker) into a thriving vertical farm for vegetables and fish. A household-sized vertical aquaponic system can fit into a 3ft by 5ft (1m x 2m) area and feed a family year-round.

Sean Brady, the aquaponics projects coordinator at the Center for Sustainable Aquaponics and Nourish the Planet in Loveland, Colo., showed us how to build a system from scrap he found around the greenhouse.

This is how to build Sean Brady’s low-cost vertical aquaponic system. All the photos are his, and if you have questions for him, you can contact Sean Brady here or email him at

Materials:
You can use the following materials or swap out anything for whatever you have on hand. Brady built this system from scrap he had around the greenhouse. We’re including pictures of other, fancier systems that he built out of similar materials to show the diversity that this kind of build affords. Measurements are in feet and inches. Sorry, rest of the world.

*Pumps
One water pump – the size depends on how much flow it would need. An aquarium pump is enough to keep the flow going.
One air pump (optional). The system can aerate itself but it can produce more if it has an air pump.

Recommended plants and fish:
Leafy vegetables, tomatoes and herbs do well in these systems. So do flowers. You can experiment to find which do well and fit your needs.
Tilapia and trout do well, they grow quickly and they’re delicious.

Assemble the pieces with electrical tape.

Perforate the bottoms of the plastic cups and place them in the holes you drilled in the side pipes. Cut a piece of 1in-diameter pipe to insert into the 1in hole in the end pipe to make a drain. The drain should pour into one of the 50-gallon drums.

You can use two 50-gallon drums like these or any other kind of container that holds water for fish. You could even scale this down and put it on top of an indoor aquarium.

Cut the tops off below the rims.

This is the assembled garden structure on top of the drums, seen from two slightly different angles.

Adjust the structure’s balance and support its joints with wooden boards. You could tilt the structure slightly toward the drainpipe to improve the water flow. Most systems will have vertical columns of equal height, but these are cut at different heights to show the range of options available.

Seed the plants in these. Put them in the cups and the holes in the vertical columns.

The final steps are not pictured, but easily explained. Cut strips of burlap or some other material, fasten them to the tops of the vertical pipes and drape them down the inside of the pipes. Stuffing the pipes with cloth like this will give the plant roots something to latch on.

These systems can scale up to commercial size, too. Brady and his colleagues at the Center for Sustainable Aquaponics set up this greenhouse for leafy vegetables, herbs and fish.

Another view of the commercial greenhouse.

This arrangement portrays some of the creativity and even the beauty possible with an aquaponic system. Among its features, there is a rocky waterfall into the fish tank and a drip-irrigation system watering soil-free plants in a rock bed.

These are different views of the above system.

Our guide Sean Brady shows what these systems can produce. He’s holding a trout here.
[source] 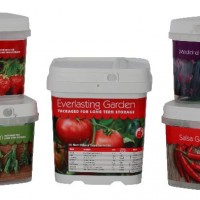 Knowing what to do and when to plant is critical. This handy chart gives you the guidelines to planting your own vegetables. Good information to create your own survival garden.