Here are a couple of examples of adding paracord to water bottles. 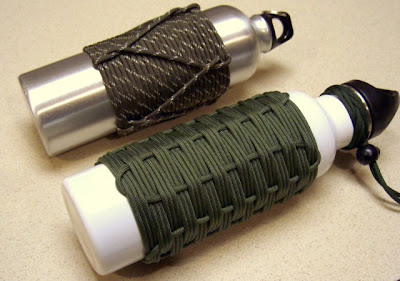 A 25 foot length was used for the one in a ‘whipping’ pattern on the aluminum water bottle. And a 40 foot length was used in a woven pattern on the white stainless steel water bottle. Both started off with coiling the cord around the bottles, with the starting end just held in place with a rubber band and later tucked to finish.
The ‘whipping'(snaking) version, an example is seen in Geoffrey Budworth’s ‘The Complete Book of Knots‘, is easily zigzagged and looped around a couple of coils on each end of the paracord coiled wraps, and tucked to finish.
The woven version resembles ‘grafting’ type knot work, as seen in Stuart Grainger’s ‘Creative Ropecraft’, but is instead a single length of cord. After coiling the cord around the bottle, one end is then worked in an over/under pattern, back up then down, all the way around the bottle. For this pattern, I went under three coils, over three coils, but like ‘grafting’, you can vary the pattern to your own tastes
.
I used a Perma-Lok Jumbo Lacing Needle to feed the paracord over/under as I worked, as well as a pair of hemostats/forceps.Here’s a woven paracord can koozie, done with a 25 foot length of cord. The weaving is just like that done on the water bottle, but with the vertical over/under part done closer together for a tighter weave before changing to half hitching on the bottom.
I didn’t have much paracord on hand to work with, so I reused some from the previous project. I would have made the can koozie a little bit taller and fully closed up the bottom, if I’d started with a 30 foot length, and a couple more feet for a cinch cord/drawstring with a cord lock for alternate use as a pouch. It still works alright as it is for holding a soda/beer can…

For cleaning paracord on a water bottle, hat, or paracord bracelet, I use a little anti-bacterial liquid soap and an old soft bristle toothbrush to get the cord clean, then let air dry or I’ll sometimes take ’em in the shower with me to get everything done in one trip, lol… 🙂

Or,  I just throw my wrapped thermos/cup into the dishwasher. I’ve had it for about 5 months now and it hasn’t been a problem.